He vowed to protect her...but can he avoid falling for her?

British archeologist Emma Williams narrowly escaped being kidnapped while conducting research in the Middle East. Now she has critical documents a terrorist group is searching for—and they’ll stop at nothing to track her down. The brash, bossy American Navy SEAL she meets in a pub was never supposed to be part of her escape plan—but if she can ignore his bulging muscles, bravado, and piercing blue eyes, she might just get out of this unscathed.

Navy SEAL Hunter “Hook” Murdock is on his way home from an operation when finds himself tracking down terrorists in London. The feisty archeologist he meets in a pub isn’t supposed to be the woman they’re searching for—but he’ll stop at nothing to protect her. The beautiful Emma may be book smart—but she’s completely naïve when it comes to her own safety. He’ll watch her 24/7 if he has to—and attempt to ignore her feminine curves, pouty lips, and whip-smart personality.

When the Oxford-educated Emma meets the rough-and-tumble Navy SEAL, all bets are off. Sparks fly as they flee danger—and attempt not to fall for one another.

Tempted by a SEAL, a standalone novel, is Book 8 in the Alpha SEALs series. 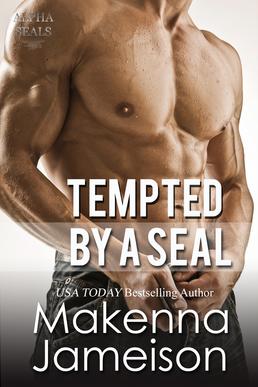