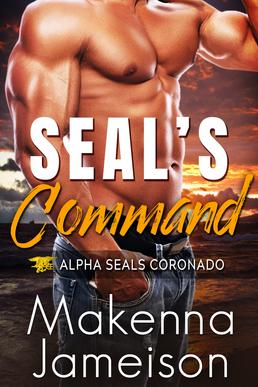 Navy SEAL Commander Slate “Striker” Hutchinson never expects a beautiful blonde to crash his weekend in a remote cabin. He can’t send her off alone in a snowstorm, so he lets her stay the night—and ignores a temptation he hasn’t felt in years. Her feminine curves and innocence aren’t what a man like him needs—not when he’s dedicated his life to the Navy.

Novelist Ashleigh Moore is looking forward to a peaceful weekend retreat. The gruff and commanding man who emerges from the woods after a hike isn’t supposed to be at the cabin—or send her heart racing with his piercing green eyes and tall, muscular frame. She can ignore the sparks of electricity between them, but when she’s injured, Slate proves gentler than she imagined.

When a domestic terrorist group tracks Slate to Washington, he realizes Ashleigh’s life is in danger as well. He’ll protect her while she’s under his care, but will he be able to let her go when their time together is over?