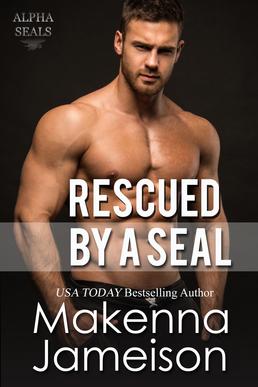 He’ll stand up to her ex and steal her heart…

Navy SEAL Mason “Riptide” Ryan has been flirting with the gorgeous waitress he met at Anchors for months. The petite brunette is shy, sweet, and sexy-as-hell—exactly the type of woman he wants. Mason’s ready to convince her he’s playing for keeps if she’ll take a risk and give him her heart.

Taylor Reynolds knows a good thing when she sees it—and the handsome, sexy, and flirty Navy SEAL meets all the marks. His strength and confidence leave her flushing every time he’s near, and she’d be willing to give him a shot if her controlling ex-boyfriend didn’t keep showing up at her door.

When her ex decides he’s not willing to let Taylor go without a fight, Mason is the only man who can rescue her. But will the assertive Navy SEAL be able to convince Taylor that their relationship is worth fighting for, too?

RESCUED BY A SEAL, a standalone novel, is book eleven in the sizzling Alpha SEALs series.