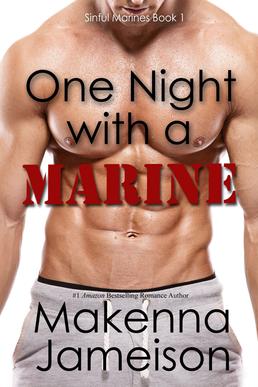 one night with a marine (sinful Marines, 1)

This Marine’s on a mission, and he won’t rest until she’s begging for more…

Amy Mitchell has been trying to move on with her life, regretful of letting “the one” get away. She’s determined to forget about men and focus on her students and the art gallery she dreams of opening someday.

The last thing on her mind?

Jason has regrets of his own—and although there’s no turning back to fix the mistakes of his past, he’s determined to do things the right way this time around. Preferably with the brunette bombshell right across the street.

As their paths cross, Amy realizes a little romance may not be a bad thing. But after a heated night in her neighbor’s bed leaves her questioning their chance of a future together, she starts to wonder—will the sparks between them only leave her burned?

One Night with a Marine, a standalone romance, is book one in the Sinful Marines series.