The rugged, commanding operative never needed a woman…until he met her.

Shadow Ops Team leader Jett Hutchinson has everything he wants in life. Leaving the military’s strict rules and regulations behind has given him the freedom to run missions his way—and lead his successful black ops team. He’s not the type of man to be tied down, but the sassy blonde with curves that won’t quit teases and challenges him in ways he never expected.

Executive assistant Anna Dubois is ready for a change. A career in Manhattan with twelve-hour days is no match for her free-spirited ways. One weekend with a dangerously handsome man changes everything. She knows he owns a successful security company but has no clue about the off-the-books missions he runs or potential danger at her doorstep.

When a quick trip mixes work and pleasure, Anna’s life is suddenly in grave danger. Jett will hunt down the man who took her and serve him up to government officials without regret, but can he convince Anna of their future together and that he’ll protect both her body and heart?

Jett, a standalone novel, is book one in the Shadow Ops Team series. 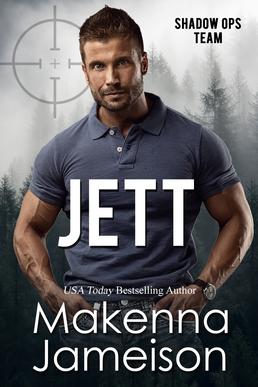