Morgan Madsden knows she’s playing with fire when her brother’s best friend shows up and doesn’t realize who she is. He’d never flirt with her if he knew the truth, but one innocent dinner with him won’t do any harm. Right?

NYPD bomb technician Colton Pierce isn’t expecting the sexy yet shy elementary school teacher when he drops by his friend’s house. He’s definitely not looking for a serious girlfriend, but he’d love to have Morgan in his bed for the night.

When Colton discovers who she really is, he can’t forgive her deception—not when he’s still seething over an incident from his past. But when Morgan is held hostage by a madman who planted a bomb in the school where she teaches, Colton’s the only one who can save her. But is it too late to save the start of their relationship, too?

Be Mine Tonight, a standalone novel, is book two in the Line of Duty series. 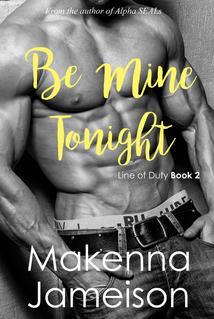