He’ll heal her wounds one night at a time….

Kenley Bristow has her future mapped out: she’ll meet a nice guy, settle down and have kids, and live the stable family life that she never had growing up.  The last thing she wants is the assertive Navy SEAL who pinned her against the door, his hard body filling hers with desire she’d never felt before.

Navy SEAL Mike “Patch” Hunter prefers his relationships to be only one night.  The petite woman with the face of an angel wasn’t who he thought she was.  But after he felt her trembling beneath him, he knew one taste would never be enough.

When an accident leaves Kenley injured and alone, she’s forced to call on the one man she swore she’d never see again.  But with heat she’s never felt before burning between them, can she fend him off long enough to escape what she really fears—a life together?

A SEAL’s Seduction, a stand-alone novel, is book four in the bestselling Alpha SEALs series. 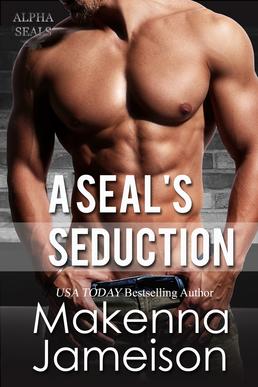